> OPSI Blog > Why innovation matters more now than ever before

Why innovation matters more now than ever before 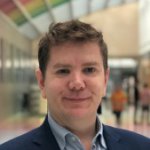 Ever since governments have first existed, they have innovated.

In more recent times, government have had to continually adapt to changing circumstances, priorities and needs. Sometimes this adaptation has involved innovative responses, and sometimes it has relied on already understood interventions. As we can see from the OPSI Case Study Platform, government continues to innovate today, in many varied ways.

Why, then, do we need any added attention towards public sector innovation? If it has already been happening, and continues to happen, why worry about it? Why do we at OPSI think that innovation in government needs more work to understand it, more effort to encourage it, and more investment in getting better at it? This is something that has come up as we think through the draft Declaration on Public Sector Innovation, open for public consultation until 22 February, which makes the case for greater attention and effort by governments on innovation.

To some, the answer is self-explanatory. They think that of course government needs to be innovating, and it is self-evident that current levels of innovation are not enough. To such people, innovation is not seen as an end in and of itself, but a necessary ongoing activity in order for government just to keep up with a changing world, let alone to get in front of the change and help shape it.

Innovation is not the be all and end all

Yet, to many others, this acceptance is not the case. They might think that:

All of these are fair points and worthy of discussion and debate. Innovation does come with costs and sometimes it can do more damage than good. Innovation is not, and should not, always be the answer, and nor is it appropriate at all times

Innovation as a core competency

Clearly though we at OPSI believe that innovation now needs to be a fundamental component of government. Innovation is not something that can be turned to only when other options have been exhausted; it needs to be an ongoing capability that informs deliberations. In our work on national public sector innovation systems we run through some of the reasons why this might be the case. 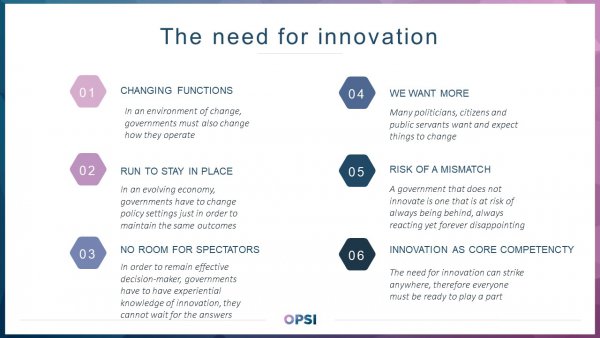 We advocate that innovation needs to move from being a reactive, ad hoc, opportunistic activity, one driven too often by individuals having to go above and beyond to drive change, to a reliable, consistent, deliberate and strategic resource that can be drawn on as and when needed.

Yet while all of the factors that we have identified are important, in this piece I would like to explore some more fundamental reasoning as to why innovation matters more now than even before.

Whether innovation is needed in government depends upon the degree to which the world is changing. A changing world suggests governments need to innovate, whereas a more static world is one where innovation is less likely to be needed or sought. The faster the rate of change, the greater the scope of change, or the bigger the volatility in the direction or nature of change, the more likely it is that governments have to ensure that innovation is a core competency. The modern world has been labelled one of VUCA (volatility, uncertainty, complexity and ambiguity), which has necessitated more sophisticated approaches.

To take this further, the greater the change, the more it is likely to involve previously unseen and unprecedented developments, and thus require novel (innovative) responses. Small changes are less likely to require significant innovation in response.

Is the world really changing faster than ever before?

Yet a question naturally arises: how can we be sure that change is, in fact, accelerating, or that we are experiencing an unprecedented magnitude of change? How can we be confident that innovation is required in government more now than before? Maybe governments will be able to manage with the capabilities they already have? After all, human history is a rich tapestry of upheaval, of wars, of revolutions both political and technological, and of social transformation. Who is to say that the change being experienced now is greater or more significant now that it has been in, say, the last 100 years?

Indeed, some, such as Gordon (2016), dispute the notion that current technological changes are as significant as those that preceded them. The argument runs that earlier technologies, such as the electrification or the internal combustion engine, had clear demonstrable benefits to productivity and living standards. In this perspective, the value of some modern technologies pales in comparison to what was achieved before.

However others would argue that technological change is following an underlying exponential shift (e.g. Kurzweil, 2005), where the major gains are sometimes not seen until the technology matures, and thus the significance of early developments will be underestimated or discounted. This counter argument suggests that seemingly slow steps in, say, artificial intelligence, will in time lead to dramatic and sudden transformations.

In short, it is easy to point to current political, environmental, economic and social challenges, but it is hard to quantify or compare these with any previous waves of disruption and adjustment.

This state of affairs is not necessarily helpful for proving that innovation is needed in government now more than ever before. Instead, it suggests that the magnitude and significance of change can only be ascertained and understood in retrospect (if at all). This has parallels with one of the essential features of innovation: being something that is unprecedented (in a particular context) any innovation is inherently unproven, and can only truly be assessed after the fact.

If we accept that:

then we reach a bit of a stalemate. We cannot wait until the present has become the past to show that we require more innovation from government, as investments and decisions must be made now. Yet if, in retrospect, current change is regarded as insignificant, then disrupting the work of government by experimenting with how to do things differently may well have been detrimental and harmful, when existing interventions would have been sufficient.

This does not help us make a clear case for innovation in government.

Instead, I would like to suggest an alternative framing to the question of change. Rather than arguing over the rate of change, I think it more useful to look at the question of “potentiality” (the possibility of something happening or of someone doing something in the future).

Technology as a creator of options and potentiality

To take a different starting point than the rate or scale of change as the justification for why innovation is needed in government more now than ever before, let us instead look at technology. Technology is fundamentally about being able to do more things. Technology, whether it be the mastery of fire or the use of artificial intelligence to solve complex problems, is about being able to interact with and manipulate the world in more sophisticated and/or far-reaching ways. The addition of new technology allows for humans to do things that we were unable to do beforehand, or that we were unable to do as easily beforehand. More technology thus allows us to do more things more easily. Technology creates options.

Sometimes it will be the case that a new technology limits or constrains the options that were previously available under a previous technology or paradigm. For instance, machine guns and tanks made cavalry and its associated knowledge, skills and uses, fairly useless in most of the traditional circumstances. The advent of new technology required significant innovation in response, to adapt to the possibilities that were now on offer. Or to take another case, scanning and email rendered fax machines pretty much obsolete. However, in general, new technologies still contribute to the creation of more options than were available before their introduction. The emerging technologies of today – machine learning, 3D printing, biotechnology – generally allow greater understanding and manipulation of the world than we have ever potentially had before, despite their replacement of many other technologies and the associated infrastructure, skills and capabilities.

In addition, as technologies have become more mature, the access to and ability to engage with these new technologies becomes commodified. Much of human knowledge has therefore been democratised, and widespread consumer access to complex computing power and sophisticated tools has allowed governments, organisations, or even individuals to have access to options that once upon a time was only barely conceivable. Individuals can now potentially reach millions or even billions through social media. Any connected person now has potential global reach and impact. In short, as technology becomes more mature, and more widespread, more people have more options available to them.

If we accept that the technology available to us has increased, and that access to technology has also increased, then it follows that there is a greater range of possible scenarios that governments might be confronted with, many of which may require innovative responses or innovation in order to prepare for (or even to enable) these futures.

In a world with more potential futures than ever before, innovation matters

Yet choices are only real if the options available are really understood, if there is some sense of the consequences or trade-offs involved with different options. If options are vague and under-developed, then they are not meaningful choices, but instead an invitation for guessing rather than selecting.

This is where the practice of public sector innovation matters: it is not merely about the creation of options, but also the ability to meaningfully understand how those options differ and what they might actually entail. In an uncertain world there are no guarantees, and things may work out very differently in practice, but this is where a sophisticated innovation capability matters. It is what provides the experience, the skills, and the judgement to navigate uncertain possibilities, and to flexibly adjust and pivot when needed. Without a sophisticated innovation capability, governments faced with a greater range of possible futures will be limited to being reactive to externally generated changes, being caught unprepared, or end up picking between different options with no confidence that the option taken will result in what is wanted.

In this context, innovation needs to be a core competency of government not only for functional reasons – i.e. the ability to achieve things – but also as a matter of democratic responsibility. If government views innovation as a secondary matter, then its ability to engage with, understand, and therefore effectively shape innovation and its wider societal effects, will be limited.

This is an attempt to think through and simplify some of the reasoning underpinning why innovation matters now more than ever for governments. We are giving this thought as we work with countries in understanding how to support national public sector innovation systems. The case for innovation is fundamental to building an innovation system; after all, if there is no acceptance of the need for innovation, then it is going to be tough to convince actors to work together on innovation.

It also matters as we seek to develop the OECD Declaration on Public Sector Innovation. While we, working with countries, have outlined some of the case for why innovation is needed, it’s still a work in progress, and the draft can yet be improved, and is open for comment until February 22.

Let us know what you think

What do you think? Do you think the case for innovation in government is clear and understood already? If so, what makes it so? If not, does what we have outlined here help make that case?

Let us know in comments, by email, or on our LinkedIn group. You can also sign up to our newsletter if you would like to be kept up-to-date with our work.