“It is the responsibility of every APS officer to explore the opportunities that are available to you through initiatives such as Innovation Month, the innovation labs and teams…” – Glenys Beauchamp – Secretary, Australian Department of Industry, Innovation and Science

Was Innovation Month really last month? At time of writing it feels like it finished just last week.

The program kicked off with the Launch on July 3, thanks to the Canberra Innovation Network for hosting.

The event included a speech by Glenys Beauchamp, Secretary to the Department of Industry, Innovation and Science (see speech here) covering where we are and where we need to be going in public sector innovation.

The event also offered a video presentation of the Innovation Award Judging Day and several of the finalists had their work on display.

In a way the Innovation Awards bookended Innovation Month, with the display at the launch and the Awards Ceremony near the end, on July 26.

The Hon Arthur Sinodinos AO, the Minister for Industry, Innovation and Science, presented the Awards at the ceremony. 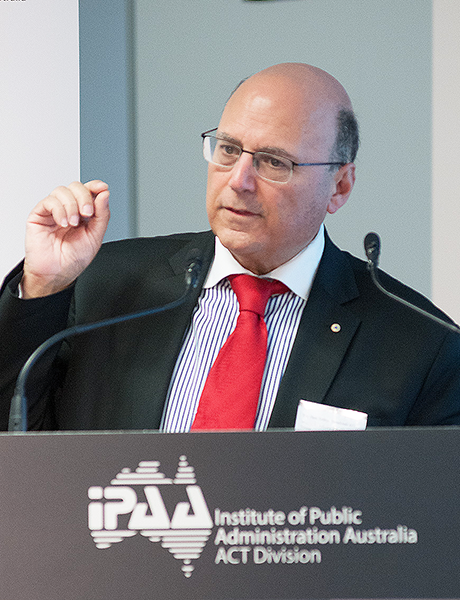 “(Public servants are) expected to experiment, to try new things because if you don’t try something, you don’t risk something, you’ll never know whether you can do it.” – Arthur Sinodinos AO – Minister for Industry, Innovation and Science.

There were 5 trophies awarded; one each for the three categories and two judges’ awards.

The Innovation Judges’ Awards were won by two finalists, the Digital First Capability project from Prime Minister and Cabinet, and the Finance Transformation Program at the Department of Finance.

In between the Launch and the Awards Ceremony was a huge range of Innovation Month events. Multiple departments and private organisations contributed to the Tour of the Innovation Labs which was very successful, more on that event here, and some departments aimed to provide the widest range of events for their staff possible.

Events across the APS

The Department of Infrastructure and Regional Development (DIRD) hosted nine events including the Innovation Show-and-Tell Showcase. At the start of the year the Innovation and Regulatory Reform group in DIRD offered courses and project work aimed changing the organisational culture by bringing new knowledge to staff. This Innovation Show-and-Tell Showcase presented the lessons staff learnt from those experiences, offering a great opportunity for DIRD staff to share.

The Department of Immigration and Border Protection (DIBP) certainly aimed for the widest range of events, with 20 events and 15 tours attracting over 1,000 APS staff to their programme.

When asked about their experience from the month, the DIBP Innovation team raised a few points:

“Following the month, and a brief period to collapse into a sweaty heap, the team have been putting together some lessons learnt from the experience and begun to look forward to next steps. Probably the #1 learning was that it’s not expensive to be effective.

The DIBP team were able to deliver their ambitious programme for very little money, but they conceded that this was as a direct consequence of the events being Canberra based.

“In fact that leads into our next learning; that the Innovation Month programme needs to be, at very least, a national programme. The DIBP has 14,200 staff across the nation, if we’re only talking to and hearing from staff based here in Canberra, we could be missing the best ideas and not talking to the people most hungry for encouragement.”

“But as soon as you start talking to a remote programme, you’re starting to talk about larger budgets because the management of remote events is a more complex and costly exercise. It’s an argument we’ll be looking to prosecute within the coming weeks and the experience and data we’ve gained as a result of our numerous events held over the month will be key in us gaining support for increased resourcing for a wider national, and ultimately international programme.”

Bringing a national reach to Innovation Month remains a challenge. The bulk of the 2017 programme was Canberra based. However in 2017 PSIN members outside Canberra continued to work hard to bring events to their local area.

In Hobart local PSIN members came together to create a forum for government departments to talk about linked data, and the vehicle for linking data; a data ontology. Data ontology for government will provide us with a greater understanding of the users of government, what they need and how we should support them; it gives us key information to understanding how policies affect Australians.

Brigette Metzler from the Metadata Management and Ontologies Section of the Department of Human Services (DHS) organised the event. For more information on the subject we recommend also looking at the Australian Government Linked Data Working Group and the Productivity Commissions’ report on Data Availability and Use.

In Geelong a group of Public Sector staff from across a range of organisations came together to hear the innovation journeys from five guest speakers representing five very different areas of the community. 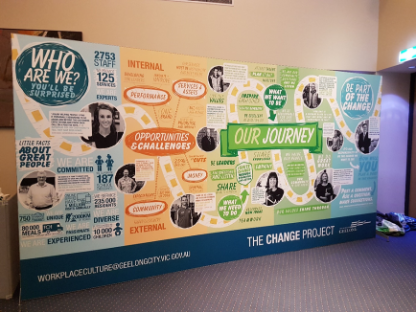 The event attracted employees from various organisations including AusIndustry, City of Greater Geelong, Australian Taxation Office, Bureau of Statistics, the DHS and Vic Roads. They found the session to be stimulating and exposed their thinking to new ways of problem solving and driving outcomes.

It is hoped that this event is just the start of things to come in Regional Victoria in the innovation space. It is just one example of how powerful collaboration between organisations can result in meaningful relationship building, toolkit sharing and better outcomes for the community members we serve.

One of our most positively received events was ‘Making Innovation Happen’ with James O’Loghlin. James gave two talks while in Canberra, one at the Department of Education and Training in Civic, the other at the Australian Bureau of Statistics in Belconnen. The civic event was broadcast on the Department of Education and Training’s Livestream system, the recording of which can be found here.

James highlighted the pitfalls of habit and habitual work; falling into a process and the dangers that can lead to of being blinkered to the possibility of new thinking. He outlaid a series of strategies to apply to break out of habitual thinking, allowing you to see opportunities for innovation and take advantage of them. 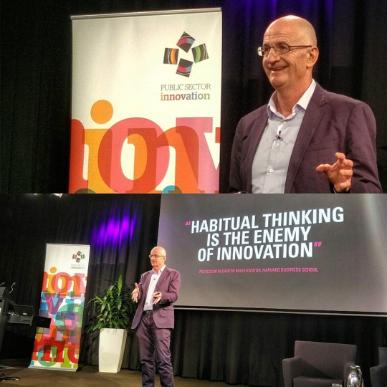 The first is to question everything.

Challenge your assumptions, analyse your data, and in line with the principles of user-centred design, think like a customer. Interact with your Department as a customer (both an internal and external) in doing so you can discover new ways to improve.

The second is to take time to think. Some of your best work ideas can come to you out of the office, during your down time when you’re away from habitual process. Without this down time those new ideas would not emerge.

Next is to realise that your idea is not going to be perfect, it’s not going to be the whole solution in one go. But sticking at your idea, developing it, be willing to share it and tell people about it and go through the process of making it a reality is key, especially if you want to learn the next important skill in innovation thinking. Which is ideas fail; you need to go through a lot of ideas to get a great idea. Failure is a necessary step in the innovation process. It’s an opportunity to learn and be challenged to build better ones.

That was the strategy for individuals, for organisations to be more innovative the acceptance of these principles need to be universal. Some organisations think that ideas can only come from leadership, but the reality is ideas can come from anyone, and often the best ideas come from those at the frontline of an organisation and know what customers like and don’t like (think like a customer). The job of innovation leaders is to motivate people to see innovation as something that their organisation should be doing, and create a system to allows that to happen.

Part of this is to highlight the importance of innovation, for this James recommended setting KPIs on innovation, for example an idea quota. If people are conscious about meeting all their KPIs then they do it.

Managers can set time aside in their week for people to pitch ideas, and if the idea is terrible, still be supportive that they brought it to their attention, that way when staff have a good idea they’ll be motivated to raise it. A supportive environment brings a carrot to innovate alongside the KPI stick.

These actions help staff see that innovation is a priority and part of their work, not an occasional extra thing to do if there is time.

And so – see you next year.

We’re still counting up the audience and collecting feedback from event holders on Innovation Month, incidentally if you did or didn’t go to Innovation Month you can still provide feedback on it here.

To date Innovation Month had over 80 events in 2017, making it the biggest one to date. As more departments develop events to contribute to the programme and groups outside Canberra organise under the PSIN banner to upskill on new knowledge we’re looking towards a great year for 2018!

This article was originally posted on the Public Sector Innovation Toolkit.